For countless young adults, apprenticeships have long served as a pathway to careers in blue-collar trades. Now, a Massachusetts community bank is using the apprenticeship model to encourage young men and women — particularly those of color — from low-income communities to choose banking careers.

Working with the state, the $619 million-asset Reading Cooperative Bank recently developed its first registered apprenticeship program for retail banking positions such as tellers and branch managers. The new program is part of a broader commitment by the bank to diversify its ranks by building a talent pipeline that includes more young Black and Latino adults.

Reading Cooperative developed its apprenticeship program well before the civil unrest of the past few weeks drew so much attention to racial and income inequality. In recent years, the bank has made a concerted effort to reach more unbanked and underbanked people, many of whom are Black and Hispanic, and it sees having a more diverse workforce as key to that broader mission. 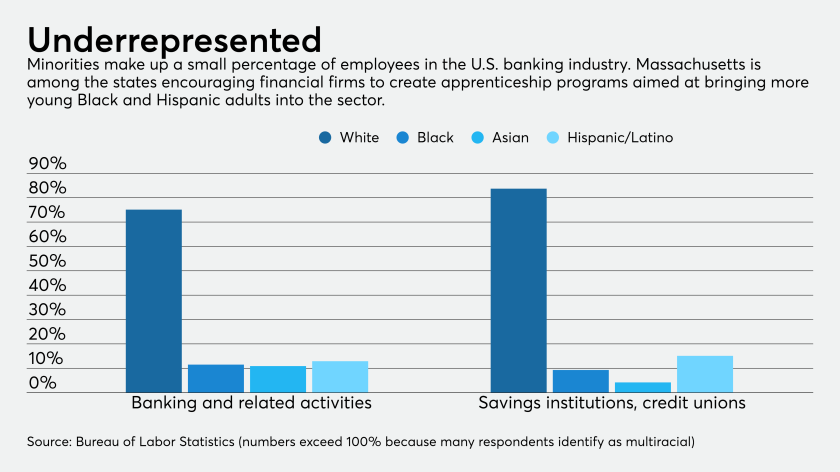 Maxine Hart, the bank’s chief human resources officer, said that young adults of color often do not choose white-collar careers for a number of reasons. They might be steered away from those career pathways while they’re in school, and if they don’t know anybody working at a bank, it simply may not occur to them. She added that banks can also do a better job of publicizing these opportunities to traditionally underserved people.

The apprenticeship program, she said, can be used “very effectively to redress some of those imbalances and open up opportunities for people for whom the door has been shut.”

People of color make up a relatively small percentage of workers in the banking industry. African-Americans make up about 15% of the overall U.S. population, but less than 12% of employees at commercial banks and 9% at credit unions and savings institutions, according to data from the Bureau of Labor Statistics.

Reading Cooperative intends to employ a number of minorities at a branch it plans to open in the neighboring city of Lawrence, a former mill town near the New Hampshire border that is the poorest city in Massachusetts. The city is predominantly Hispanic and has a large immigrant population. Many city residents still rely on alternative financial services, like payday lenders and check cashers, and are blunt about the fact that they don’t trust banks.

The bank aims to earn that trust by employing people who live in the community. A state-registered apprenticeship offers a clear career trajectory, defined by specific core competencies and a certain number of training hours required for certification. That resulting certificate is almost akin to a diploma, in that apprentices can take it with them if they move to a different company.

Apprentices are hired as employees and are usually assigned a mentor within the company. They work side-by-side with experienced bankers and must master a set list of competencies for each position. Apprentices can work either full-time or part-time, but must complete 2,000 hours of on-the-job training to earn a certification.

The state works with private firms to develop these apprenticeship programs. It ensures that those companies are meeting consistent standards for training in a particular discipline and are paying apprentices appropriately.

So far, Reading Cooperative has enrolled 12 employees into its apprentice program, and six have completed some level of certification. Currently, its apprenticeship program is focused on retail banking, but it plans to eventually roll out similar programs for residential and commercial lending jobs.

Banking apprenticeships are fairly common in the United Kingdom, said Ally Van Deuren, the U.S. university relations lead for the professional search firm Korn Ferry. Those programs tend to last for at least one year and usually include a rotation through different functions within the organization.

“I was particularly pleased to see what Reading is doing because they’re…targeting people of color in a low-income area,” he said. “I think you’re going to see that percolate across the industry at a much broader scale.”

One reason banking apprenticeships may be more common in the U.K. is the availability of government funding to companies that participate, Van Deuren said.

Apprenticeships in the U.S. are largely concentrated in blue-collar trades and they tend to be dominated by white men, though the state of Massachusetts has been trying to change that.

In 2018, the state’s executive office of labor and workforce development began a campaign to encourage more white-collar industries, like tech or banking, to develop apprenticeship programs. It has also encouraged participating companies to reach out to underrepresented groups to participate in these programs.

Reading Cooperative has been the only bank so far to do so.

The bank worked with the state’s department of labor standards to formalize the program, developing a checklist of core competencies for various retail banking positions and setting a prevailing wage for those jobs.

It wasn’t difficult to come up with those competencies, Hart said, because the bank had already established an internal checklist for what an employee needs to know in order to move up to a new position.

The bank is flexible about who it accepts as apprentices, although it’s targeted most of its recruitment efforts toward people who live in Lawrence.

Some of its apprentices came from the Greater Lawrence Technical High School, while others came out of a training program offered by the nonprofit Lawrence Community Works. A few others were already employed by the bank but wanted to participate in a more formalized career development program, Hart said.

“When states can push programs like this and what they’re doing, particularly with diverse communities, it’s only going to make that pond we’re fishing in more diverse,” said Cameron Boyd, a partner with the executive search firm Smith and Wilkinson.

Reading Cooperative executives hope to see more banks follow suit and develop their own apprenticeships. It’s a lot of paperwork to get started, but being a highly regulated industry, banks should be used to that, Hart said.

“I think we have a responsibility,” she said. “If it’s a lot of administrative work that needs to be done, then that’s a small price to pay.”